There are two main well-marked routes up to Montenvers from Chamonix, both start opposite the Montenvers train station on the edge of Chamonix town centre. If you’re feeling lazy, you can ride the train up to Montenvers and have a wander down one of the two – both are nice.

Following the road up alongside the railway and the theme park, and eventually the track leaves the ski slope and slips into woodland. At this point the two routes up split off.

To the right, this route initially snakes up to Les Planards at the top of the ski slope, before taking a steeper zigzag up the hillside, crossing the railway track. 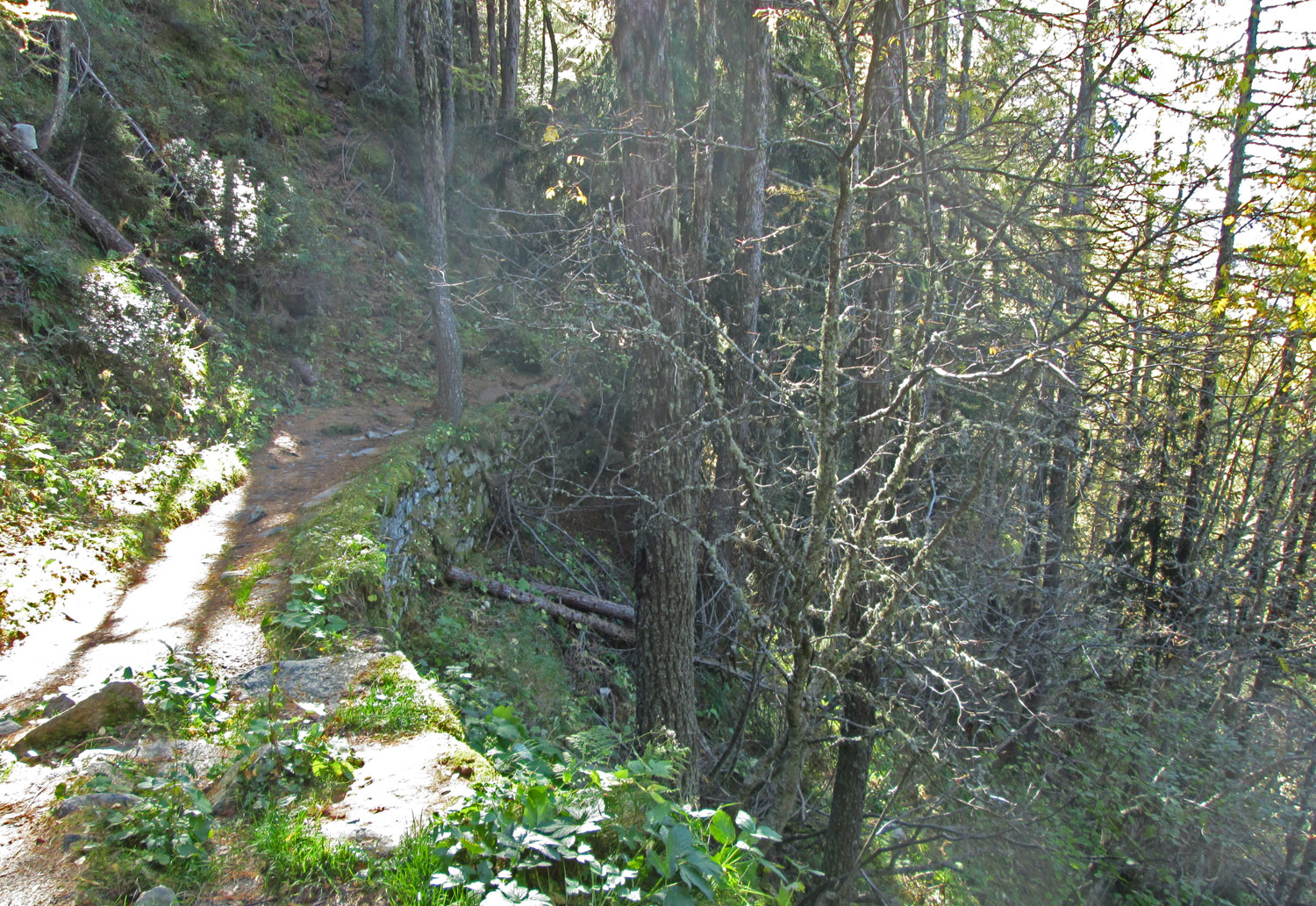 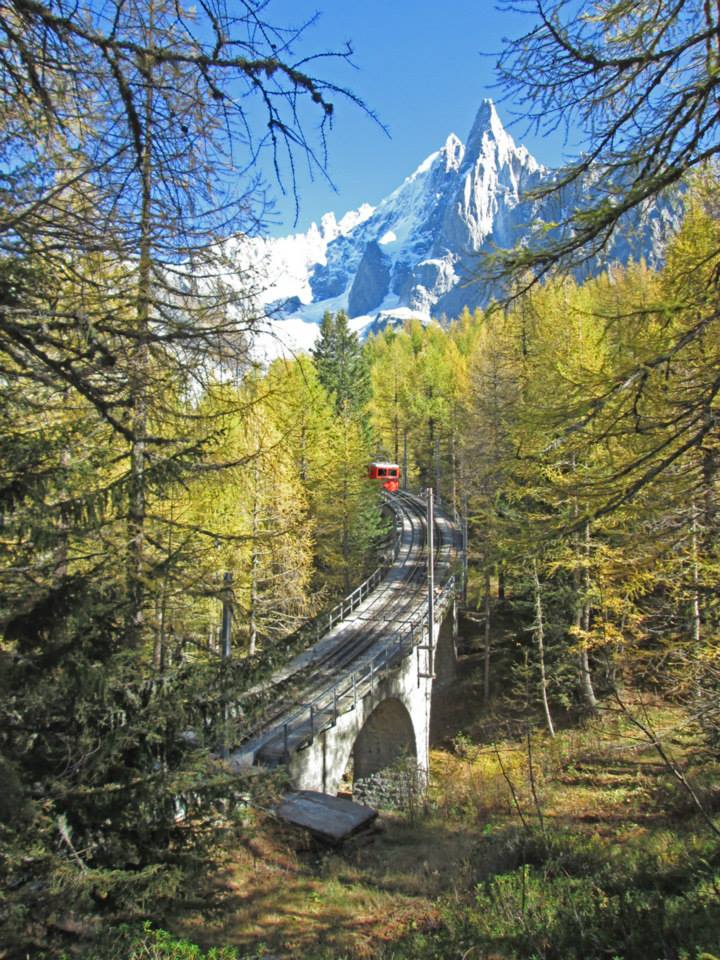 Height is gained quickly as the track varies between traversing through thick ancient woodland and taking steep switchbacks. After crossing the railway line again, it begins to level off as an ancient forest track.

The railway once again rises up to meet the track, crossing a couple of viaducts, with the dramatic Aiguilles des Drus dominating the backdrop.

A final ascent to the Refuge du Montenvers, an austere-looking building perched on a spur with views both over the Chamonix valley and up the Mer de Glace. 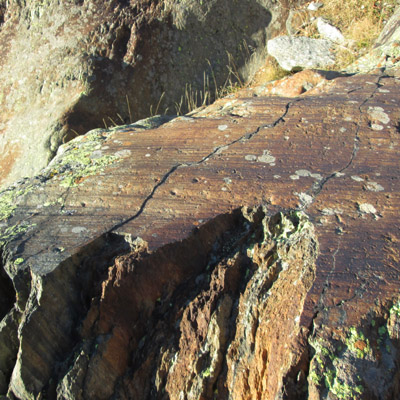 This route splits off left at the woodland junction and follows the logging route up for a fair way, winding up more gradually than the pony track. Eventually after an hour or so the track starts traversing some incredible expanses of glacier-scoured bedrock – this whole area was covered by hundreds of meters of ice just a couple of centuries ago! You shortly arrive at Les Mottets, where you may find the Buvette open for a quick drink or snack. 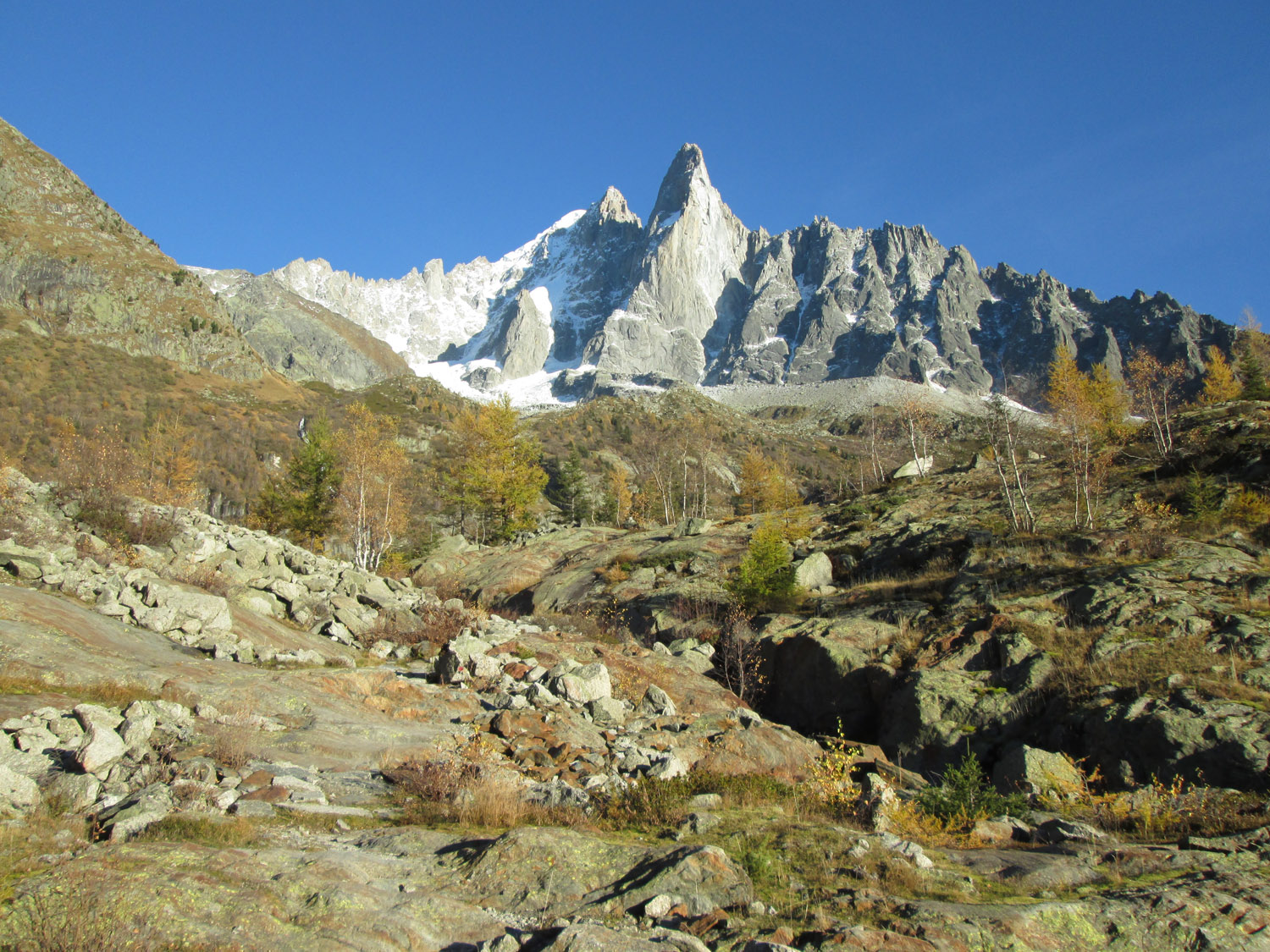 At this point the Grand Dru towers in front of you, with tantalising glimpses further up towards the very snout end of the glacier. It’s receding increasingly rapidly these days, as you’ll see further up.

The route here becomes much more of a hiking track, with a scramble up a fixed iron ladder. 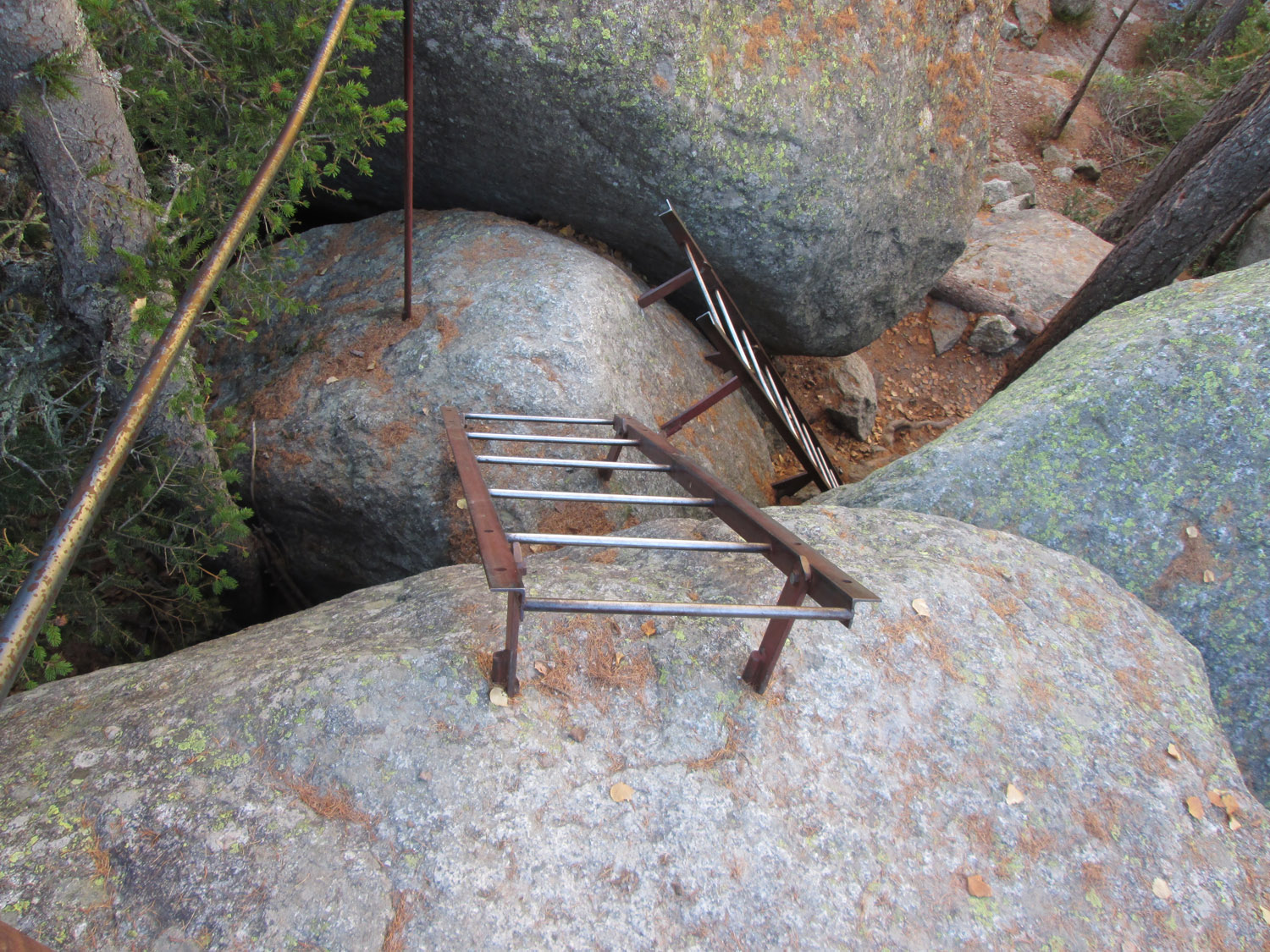 The track becomes pretty damn picturesque as you thread through the pines clinging to the old lateral moraine of the glacier. Eventually you rejoin the pony track as the walk begins to plateau off above the treeline at the Refuge du Montenvers. 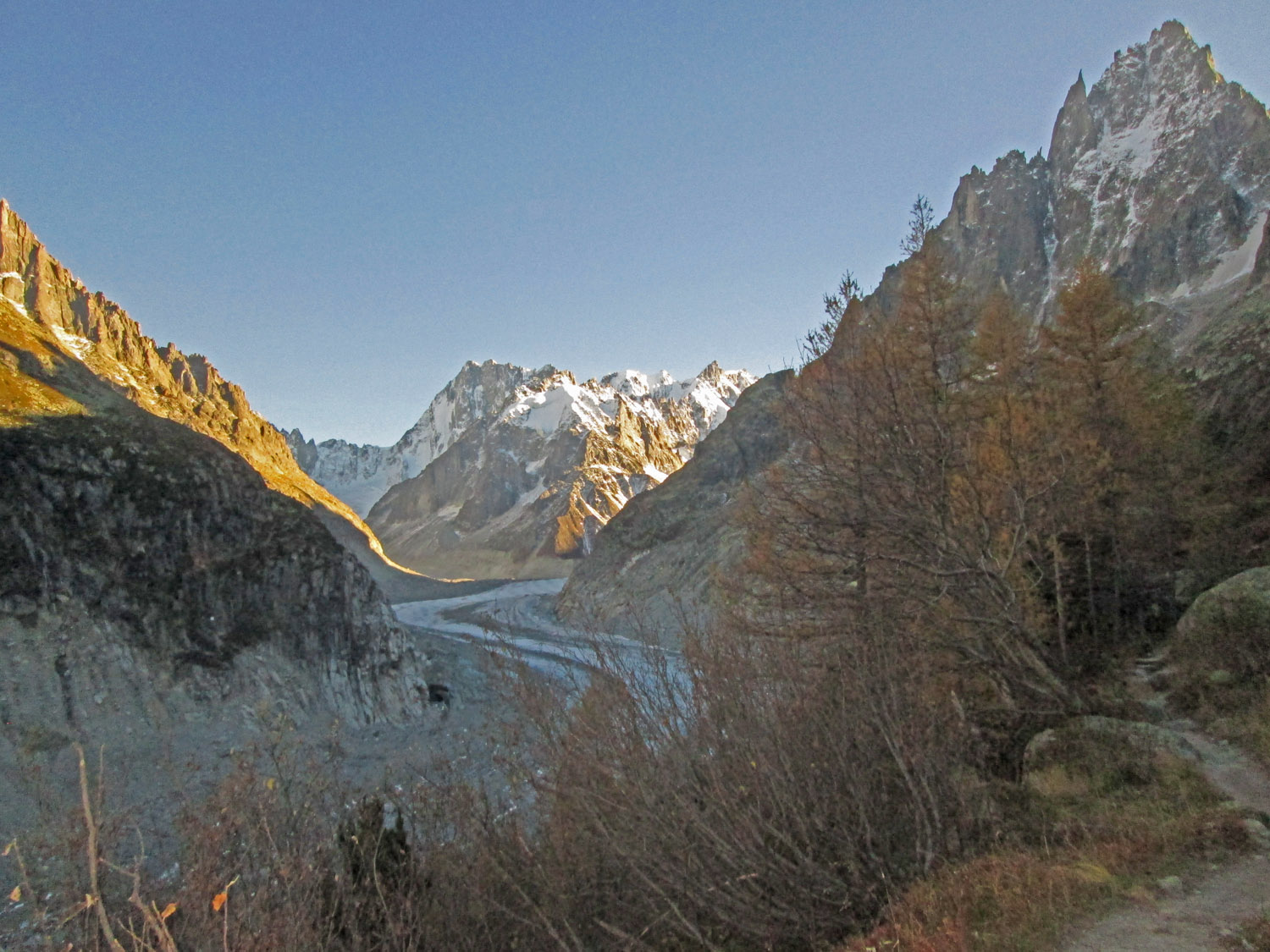 You’ve now got just a simple stroll alongside the last stretch of the railway to reach Montenvers station, and the stupendous view over the mighty Mer de Glace (Sea of Ice). Much reduced from its former glory, when the ‘sea level’ reached up to a few metres below the station, the tail end of it now creaks angrily hundreds of metres below. 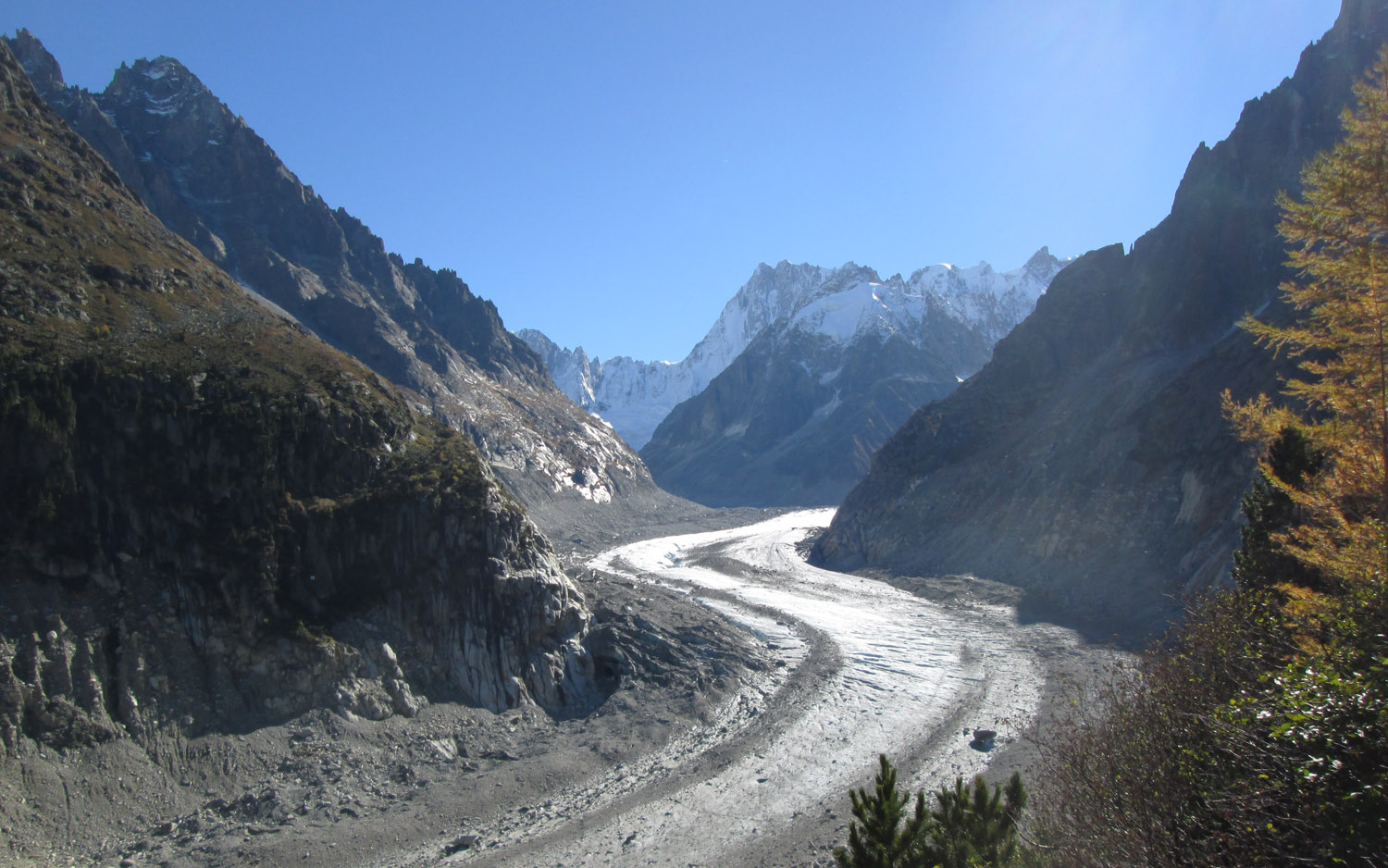 The mighty Grand Dru is the sharp pinnacle towering across the valley. You’ll probably be able to spy patches of lighter-coloured rock from the regular rockfalls . One of the world’s most famous great off-piste descents finished down here, having descended many kilometres down the glacier from the Aiguille du Midi cablecar way up at 3842m.

Time for some overpriced refreshments or gifts at the station if you’re that sort of person. An optional extension to this walk is to head up-valley along the concrete path to where you can begin descending. Zig-zagging down the valley walls you’ll pass labels marking the height of the glacier in various years. The scale of what’s melted, and what this valley must’ve looked like when the railway first opened, is really put into perspective.

Now it’s time to choose which of the two routes you fancy taking back down, for a pleasant gravity-assisted stroll back down to Chamonix town for a burger at La Maison Des Burgers on the main street, followed by a few well-earnt beverages at Monkey bar 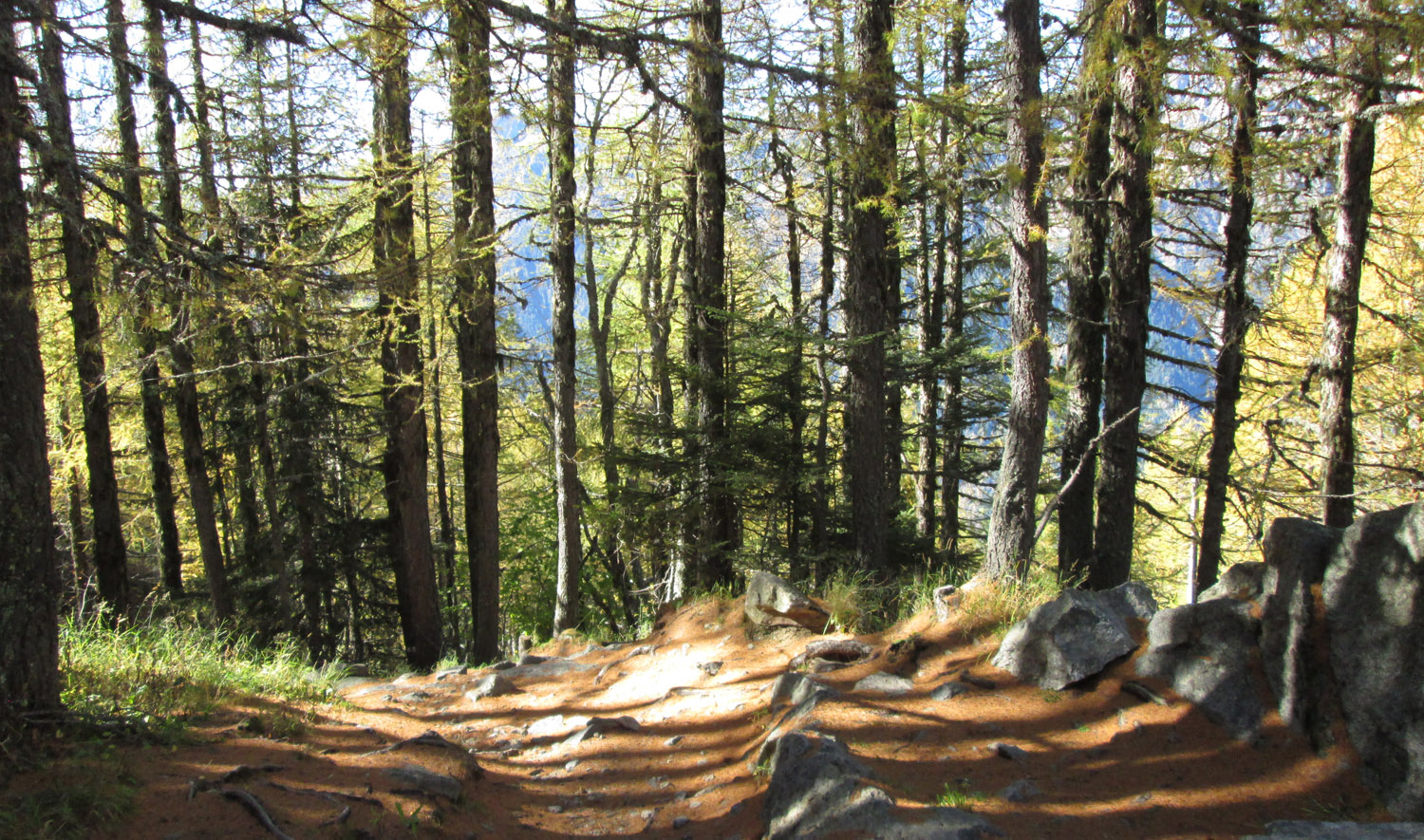